The discussion is the hardest part of the paper to write and is certainly the most difficult to write well. I think one of the reasons that many people struggle when learning to write the discussion is that there isn’t a nice simple formula you can follow like in the results section. Most people learn by experience. The more you read and write papers, the better you’ll get at writing engaging and interesting discussions. However, there are some general guidelines you can use to help you on your way.

The Purpose of the Discussion

Before we get into the guidelines, I think it’s important to first examine the purpose of the section itself as this will drive, in part, your decision making process on how to approach writing it. The discussion is for interpreting your results, it is not a re-hash of your results section. I know this seems obvious, but you do sometimes find papers where the authors are wasting both their and the readers’ time essentially repeating what we’ve already seen in the results. This serves no purpose and does not illuminate the subject any further for the reader.

If you think about how the paper has been presented so far, the introduction has said “this is the field we’re studying and these are all the background details.” The aim then told the reader “given that prior knowledge, this is what we’re going to do.” The results followed up with “this is what we found when we did what we said we’d do.” After all that, the purpose of the discussion is to say “this is what it means.” So your job as the author is to do some meaningful interpretation and perhaps a bit of well-founded speculation with respect to your results.

Continuing with the story-telling theme and the three-act narrative structure, the discussion is very similar to second half of the second act (the results being the first half). In most three-act stories, the main character is by now armed with new skills and awareness, and uses them to overcome obstacles in the second act. In Star Wars, Luke uses his new appreciation for the evils of the empire as well as his knowledge of the force to strike a blow against the bad guys. You, as the author of the paper, will combine your previous knowledge of the material (your introduction and aims, as well as other papers on the subject) with the new knowledge gained (your results) and push forward into new areas in the discussion.

Guidelines on How to Discuss

Okay, so we know why we’re writing the discussion, but how do you do it? How do you pick what needs to be discussed - and what exactly do you do to “discuss” it?

What you pick is driven by the narrative of your paper. This is, again, why selecting a narrative before you begin writing is so important. It shapes the flow of the paper, from how you present your results to how you interpret them in the discussion. The scope of your paper, which you should have already been addressing in the results, will help you here. You should be focussing on discussing the most important and interesting results and trying to craft a story out of them. I find if I get a little stuck here, that it’s useful to go back to the results section and re-read the observations. You can then use these as a starting point for what you should be talking about.

Remember that it’s impossible (and unwise story-wise) to discuss every little thing in detail, so you should be picking out the most interesting and important things worthy of discussion. Also, try to keep it consistent between the results and discussion. If you’ve spent time pointing out results in your observations that do not appear in your discussion, or you discuss major points that are barely mentioned in the results, your paper won’t flow well and the reader will be taken out of the moment and lose interest.

On to the next part. How do you “discuss” the points now that you’ve selected them? Well, as the saying goes, one must begin at the beginning. And in the beginning, you laid out the theory as to why you were doing the experiments in the first place, so you should start by comparing your results with your hypothesis. Do they stack up to the theory and if not, why not?

Once you’ve addressed the internal consistency of your report, you can begin to look further afield and compare your results to those of other, similar studies in the field. This means reading as many similar papers as you can find. It’s a laborious task, but it’s vitally important because your results form a tiny piece in the collective puzzle that scientists from around the world are trying to solve. The reason for this is that science is not done in a vacuum. There will be other groups that are working on, or have worked on either the same thing as you, or something very similar. Do your results fit in with theirs? Do they make sense in the broader scientific context? If not, why not? Perhaps your methodology was different. Could your (or their) methods be at fault?

These are the sorts of questions you should be asking, as the answers will push scientific progress forwards. If the results of similar studies match up in a logical and coherent manner, then we ought to be on the right track. If not, then we need to figure out what’s going on and solve those issues. 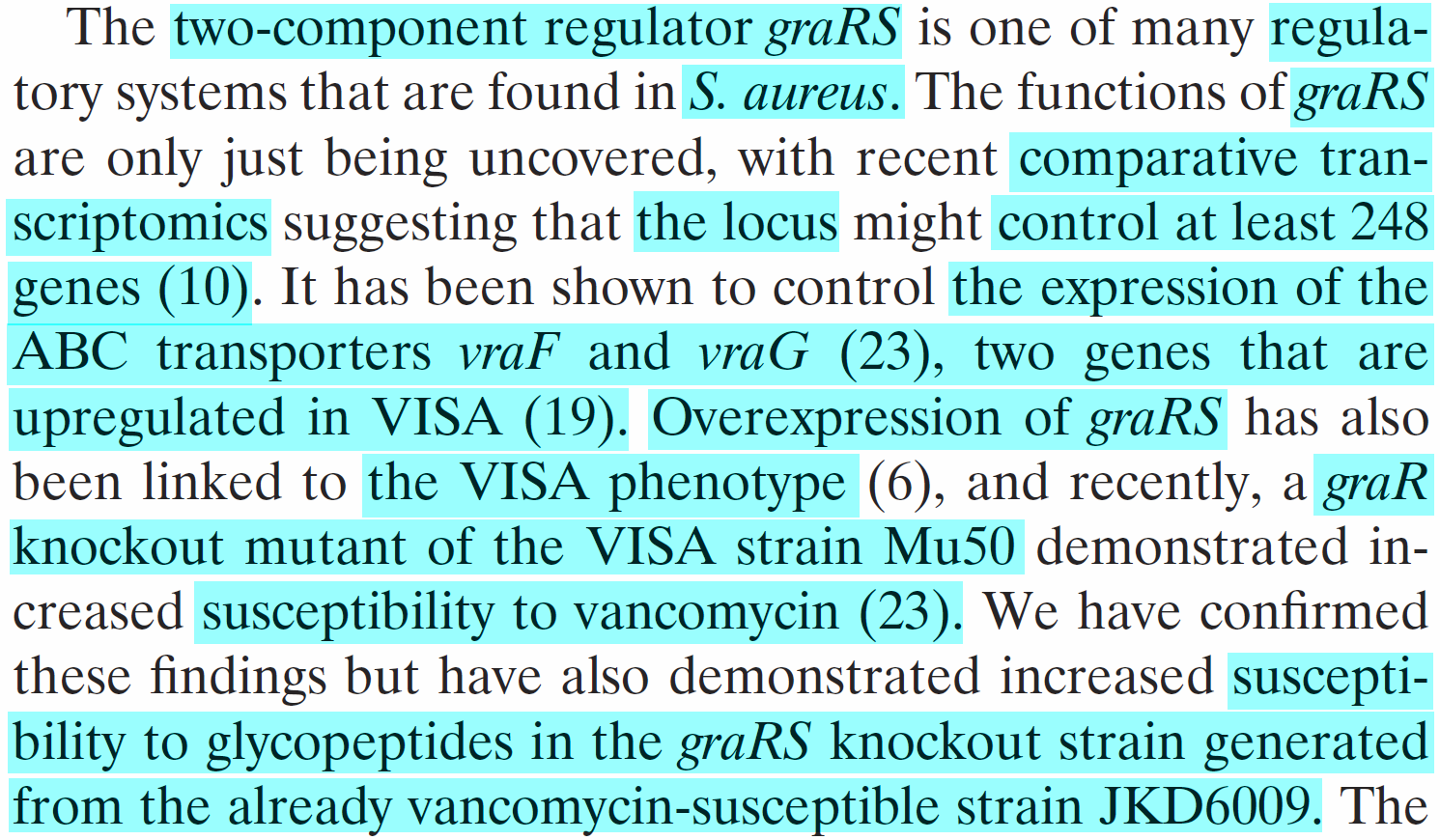 Here is a good example of looking further afield and comparing your own results with those already published in the scientific literature. This is most of the second paragraph of the discussion in a paper on bacterial genetics. Dispensing with the yawn-inducing jargon highlighted in light blue, we have a very compact review of the current state of the literature (at the time) on this subject and exactly how this paper fits into the canon. What it says is: "The [thing we're working on] is one of many [similar systems]. Its functions are only just being uncovered, with recent [experiments] suggesting [it does genetics jargon things related to the findings in our paper]. [A different experiment by this other group] has also been linked to [the phenomenon under study], and recently a [further experiment by a different group] demonstrated [alteration of the phenomenon under study]. We have confirmed these findings but have also demonstrated increased [more jargon related to phenomenon under study]." You can see they begin by stating what the system under study actually is, and then cite a whole heap of other papers on the subject that explain what we currently know about how it all works. They then follow that up by saying that their paper basically fits in with what we already know, but also provides additional information we didn't have before. (Howden et al., 2008)

Digging into the scientific literature and comparing your results with those of other scientists puts your report into context with the rest of the field. This is an important part of the plot for the reader as it allows them to see the bigger picture. It also gives you scope for speculation and extrapolation. Normally, those are taboo words in science because they can lead you up a certain creek without any means of propulsion. However, this is the discussion section and as such you’re allowed to voice your opinion and speculate as to what a result means or why you think something does or does not work.

If you want to be taken seriously, though, you can’t just say whatever you like. You must back up your assertions with reason. You might, for example, say something like: “given that [results a, b and c] from [experiment x] were within [parameter y], it is likely that [the thing we’re studying] is doing [whatever it is you think it’s doing]. Indeed, Helder and Morello [paper citation] studied a similar system and it [worked in basically the same way].”

Constructing a coherent argument that makes sense - and drawing on the results of other papers to bolster your point - means that although you’re speculating, at least it’s well founded. By doing this, the other thing you will acheive is to push the boundaries of science outward. The speculative points you make are now the basis for new and testable hypotheses, providing new avenues for research.

Finally, discussions often include a bit of marketing - but not in the form you’re used to. Basically, since you’ve put all this hard work into doing these experiments and writing the report, it’s a good idea to sell their significance to the audience. As such, you may consider talking about potential commercial applications of the research. Perhaps your project could benefit medical science or industry. You can also talk about the future directions of the project and where it might lead.

These things are important because scientists must sell their work in the open marketplace of ideas. You want to be noticed and have your papers cited by peers in your field, as this is ultimately what builds your reputation and hence your career. Again, the structure of your narrative will help you to get these ideas across. You should be working toward a satisfying ending by tying up all the loose threads of the story into a neat package.